This is the photo that won an Honourable Mention in the “Invisible City” category during the 12hr #AthensPhotoMarathon.
I was so pleasantly surprised to see that they actually included 2 more of my photos (so 3 out of my 4 submissions!) in the exhibition, in smaller prints. 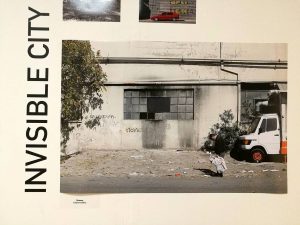 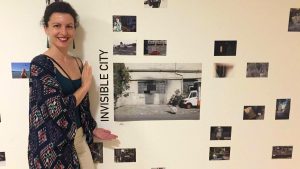 It was such a thrill to have my work exhibited in this prestigious museum! For more information on the Athens Photo Festival and the Photo Marathon, click below:

One of my black and white photos (the one you see above) was selected in an international photography contest to be part of the “Monochrome” exhibition at the Blank Wall Gallery in Athens. Apart from being very excited about the distinction, I am also very proud to be exhibiting alongside some truly talented photographers from across the globe.

At the opening night I happened to overhear a conversation that resembled that of a friendly wager for the location at which my photo was taken. One person was saying that it must have been at a sports stadium, another was sure it was at an ancient amphitheatre. In fact, they were both wrong!
I approached them to ask what led them to believe that it was taken at either of these places and they pointed to the steps reflected on billboard surface. While one was seeing bleachers suggesting a stadium, the other was seeing the round shape of the stairs alluding to an ancient theatre.

Sometimes when you see something it’s difficult to unsee it. I had snapped this photo in Rome, more specifically, in a tunnel while exiting Vatican City. Obviously, having been at the actual scene, I had never noticed the roundness of the steps that were a mere result of the converse surface they were reflected on. This gave me a new perspective on this photo and made me reflect upon the different ways one can see and interpret an image based on their personal experiences. 🙂

The exhibition runs until March 8th and it is really well curated, so make sure to stop by and travel through the black and white prints of many fantastic photographers from around the world.